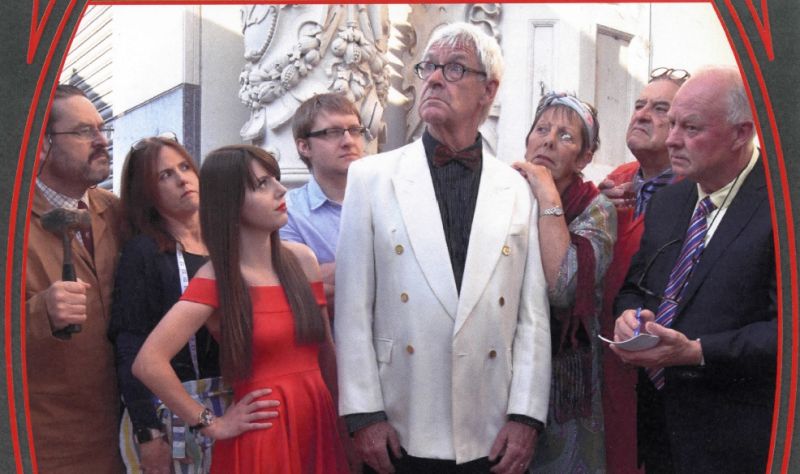 This group formed in 2012 as a splinter group from the Panto Group to put on a murder mystery show (Soap Suds) in the September following a panto production of Puss in Boots. It was the brain child of Helen Sadler who continues to be the Major Domo, producing and sometimes writing the scripts.

So far, the group has put on these productions:

2013 The Mystery of Talbot Manor by Gary Simpson

2014 A Fete Worse than Death by Gary Simpson

2015 Return to Talbot Manor by Gary Simpson;  A Mafia Wedding by Paul Falcone

2018 Death by Radio by Paul Falcone

This is how most of the productions have run: weekly rehearsals in someone’s house for a couple of months; a dress rehearsal at Humphrey Perkins; the production starting at 7.30pm.

The evening starts off with the cast of 8 in character, meeting and greeting the audience and guiding them to tables of about 8; the enactment of the murder (about 30 minutes); a main meal served to the tables – probably a ploughman’s while the audience discuss what they think has happened; a question and answer session where each table can ask a member of the cast one question; dessert served to the table during further discussions; a second question and answer session at the end of which each table submits their agreed Who, How and Why; the denouement; an impassioned explanation by the murderer; presentation of prizes for the table or tables who got it most nearly correct.

With a full bar running, this made for a very jolly evening and the group’s productions were very popular.

During the pandemic the group has experimented with an on-line Zoom production with a similar format. Well done for that!

After the pandemic: who knows! The Murder Mystery Group will most certainly carry on but no-one quite knows where or how.

If you would like to be considered for a role, either to act or to help in a myriad of other ways, please phone Helen on 01509 621050 or Ceri Fairbrother via Facebook.